My extra night classes on écorché (air-kor-shay) just began at Studio della Statua. It's taught by master sculptor Jason Arkles.  These classes are of great help in understanding Anatomy.
Why anatomy?  The understanding of the nuts and bolts of it will help any artist or sculptor know how to apply the human figure on a canvas or modelling one out of clay.

Tonight we began working on the head. Besides osteology and myology, I'm learning Latin. It's a load of jargon, but in time I will digest it with wisdom. 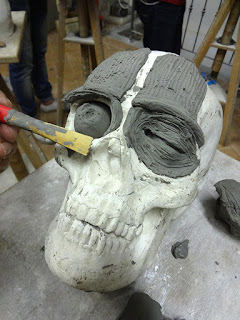 Here's putting on some plasticine on a skull to understand the human head muscles. 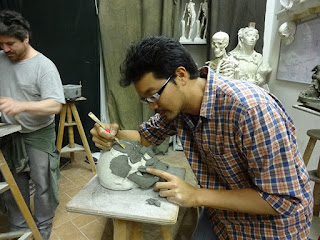 Behind me is Jason showing me a muscle or two about the human head.


During the Renaissance in Italy, around the 1450 to 1600, the rebirth of classical Greek and Roman characteristics in art led to the studies of the human anatomy. Many painters and artists documented and even performed the dissections themselves by taking careful observations of the human body. Among them were Leonardo Da Vinci and Andreae Vesalius, two of the most influential artists in anatomical illustrations.

An écorché (air-kor-shay) is a figure drawn, painted, or sculpted showing the muscles of the body without skin.