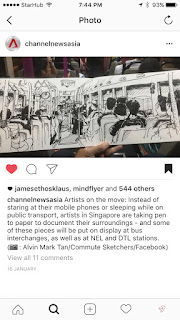 Recently, a bunch of us artists who are part of the Commute Sketchers founding group from Singapore collaborated with one of the main transportation companies in Singapore - SBS Transit, to have our sketches displayed in several MRT stations and bus interchanges. Heading the group is Erwin Lian of the Perfect Sketchbook success, and all of these sketches are done live while commuting in public.  Thank you SBS Transit for getting our work out there for the public to see. 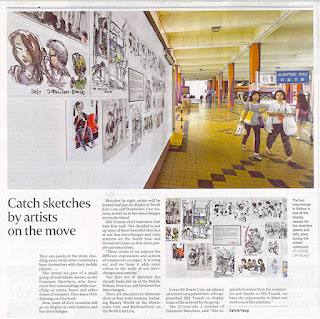 I first started actively sketching on trains during a trip to Yokohama, Japan, for an Animation Festival. That was at the beginning of 2010 during my animation diploma days.  And because I was there during the winter season, I enjoyed sketching commuters in their winter wear, something I don't get to see much in tropical Singapore. It allowed me to focus on volumes as the
gear they wore were of the bulky sort.

The main reason why I sketch while on the go because as a traditional painter, there's always this monotonous and echoey voice that keeps playing like a broken record player in my head that says, "Keep drawing all the time... ." And since I'm in a space with (free) models, why not? I'd like to think of it as using my time wisely. Back in Singapore while on the trains, I love sketching people standing up. Also scenes that I often don't see everyday: cosplayers riding the train, babies in prams, travelers with huge luggages on their way to the airport, etc.

One of the thrills while sketching commuters is to sketch them without seeing you do it. In the last 6 years or so of commute sketching, I may have been caught about 4 times. You just get better at being a ninja over time and practice.

If your daily commute is long and if you're interested in picking up this activity, head over to my youtube link https://youtu.be/NzibLiGFzwE for a quick video intro to Commute Sketching. 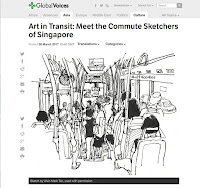 Word even got outside of Singapore about our moving activity