Last year (2012) in March, I officially joined Urban Sketching Singapore. Being in the group assisted greatly in my initially fear of sketching outdoors.  Being in the group allowed me to NOT focus on the curious by-stander scrutinizing my work, and furthermore, I could also receive advice and tips from the veterans.

About a year ago, I was sketching in France. But the south of France where I began my very long sketch walk on the Camino Frances in St Jean Pied du Port.  This year, I am up north in France, in a city you might have heard of - Paris. :) It's a winter break from school and my schoolmate invited me to join him and his family in the La Defense area. Homestay and home-cooked food from Bangalore everyday… what a deal! Initially, it was a 7 day trip, there was so much to see, I extended it to 2 weeks! I had been to Paris before as a backpacker tourist for a couple of days. But to live and breathe the Seine, do grocery shopping at Auchan every other day and cook, that's nearly as close as being a resident here. Here's sketching the world, one city at a time.  :)

Here are my ink sketches using my trusty Hero pen!!
(All images are 21cm x 60cm on a Moleskine A4 watercolor sketchpad.)

I misread a message by Mr Tsunehiko and waited for him ON the street level of Luxemborg Station instead of meeting him IN the Metro line. My bad.

We finally met and he brought me to a wonderful location to sketch by the river Seine.

This sketch session was organized by Kim - who looks after USKParis. This is Le Musée des Arts Forains in the Bercy area. It's a turn of the century amusement park that is opened to the public once a year. The restoration work is astounding. And another bonus... someone offered me a free ticket.

This piece need no introduction. I come from a place where it averages 27 degrees celsius all year round. Sketching outdoors in the chilly weather has been challenging for me.

Sounds like confession by it's been more than a month since I last posted. :) The workload at school got a little heavy towards the end of the term. But now I'm in Paris enjoying the company of a schoolmate whose family invited me over for a visit.  What a deal!

But since school is out and the local beaches during this cold winter climate is a no-no for model sketching, I look to the subways for train system sketching practices. It helps me focus on gestures because you never know when your model has to alight, looks in another direction or when the train gets so packed like a tin of sardines you don't need to hold the handles for stability because the people around you are pressed up so tightly against you. :)

Sketching in the subway also trains (no pun… really) you how to keep on track (Ok, this one I tried too hard for the pun) quickly at your model as many of them will be very conscious that you are drawing them. So if you are ever doing this and your model happens to be within a 3 metro range, start by looking elsewhere. When you peripheral vision tells you that he or she is not looking at you, glance at your model for a couple of seconds, and if you if your model will be looking back at you… casually turn your eyes away. :)  So far only about 5% of the people are sketch are comfortable with me sketching them and no I have not been fined for stalking people. That's why it's an Art. :D

Enjoy! And have a restful and peaceful end of the year festive season!! 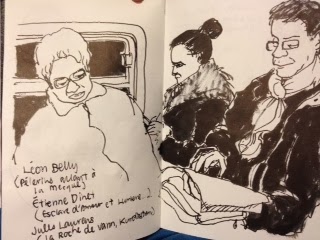 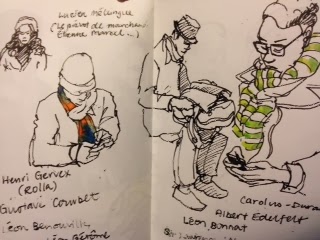 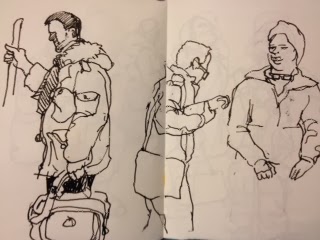 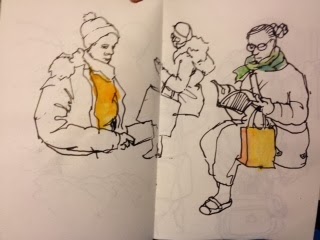 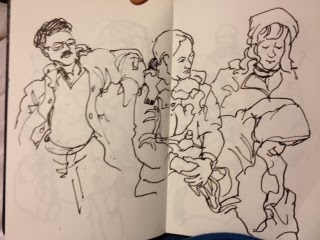 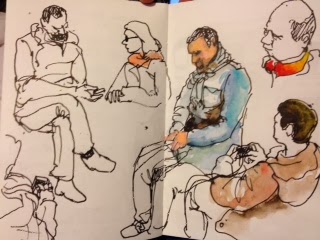